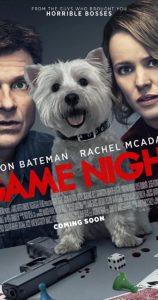 Game Night is a comedy/mystery/crime/action film rated 14A and is directed by John Francis Daley and Jonathan Goldstein. It premiered February 23rd 2018 and stars Jason Bateman, Rachel McAdams, Billy Magnussen, Sharon Horgan, and many others. Max (Jason Bateman) and Annie (Rachel McAdams) fall in love after playing game nights with their friends. However, their marriage becomes a bit exhausted due to their inability to have kids. To which their doctors speculate that it is stress caused by Max’s successful and popular brother Brooks (Kyle Chandler). Not to mention that his brother’s impending arrival to town causes him to be a bit uneasy and jealous. When Brooks decides to host a game night with Max, Annie, and some friends, he decides to take game night to a whole new level with promises of thrills with a reward of his new sports car. The plan of the game is a fake kidnapping of one player and the other contestants are to find the player kidnapped. But the game takes a twist, as they later find out that it’s not “fake” after all.

Both John Francis Daley and Jonathan Goldstein have yet again brought an adrenaline-filled movie to us. Throughout the movie, there were many twists and turns, comic scenes, and seat jumping incidents that brought the audience many laughs and shocks. Overall, I would say that the movie is great to watch with a group of friends. I would recommend this movie to those who are 16+, as there are some scenes of violence, coarse language, light alcohol use and a few adult jokes.

Is there any smoking in the movie? There was no tobacco present in the movie, (however there was alcohol present).