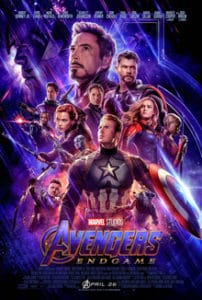 AVENGERS: ENDGAME is the fourth movie of the Avengers series. After the tragic events that took place in Avengers: Infinity Wars (2018), the universe and half the population disappeared from existence. In this fourth movie, the Avengers assemble once again to reverse the actions of Thanos, and restore the universe.

I would suggest the audience for this movie to be for anyone who is 13 years or older. I recommend 13+ because there are major scenes of violence throughout the movie that may not be appropriate for younger viewers.

Did the characters appear less believable/realistic because they did not use tobacco or vape?

The characters appeared to be adventurous and believable with the absence of tobacco and vaping use.

Not having tobacco or vaping products in the movie had the benefit of showing the audience that you don’t need to use tobacco or vaping products to be seen/viewed as cool, or heroic. Since the movie is targeted towards teens and young adults, it is important that this movie demonstrate that you can be just as strong, adventurous, and heroic as the characters are without the use of those products.