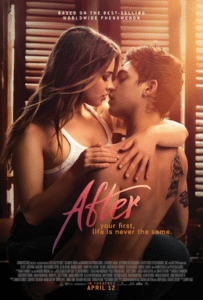 AFTER is about Tessa Young, a young girl whose life is dedicated to school, her boyfriend, and pleasing her mother. She enters college, and instantly hits it off with her roommate who starts taking her to parties, and teaching her how to have a little fun with her life. Her mother and boyfriend at home both disapprove of this new Tessa instantly, but that doesn’t matter to her, because of Harden Scott. He makes her question her entire life up to this point, and makes her want to live, instead of just walking through life trying to live up to her mother’s expectations.

What was happening in the scenes with smoking / vaping?

The main character Tessa’s roommate was hitting a juul when Tessa first arrived to college. There was also a scene at a party where someone was recording another person hitting a vape because “it looked cool”.

Would you notice if the smoking / vaping was taken out of the movie?

I would not, because the vaping did absolutely nothing for the plot, except make the characters seem more like typical “college students”.

Did the movie show the real health effects and consequences of tobacco use?

There were no health effects of nicotine use shown in the film.